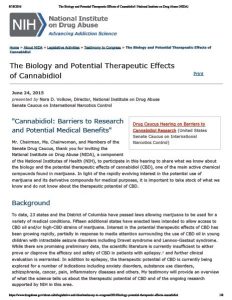 Therapeutic Effects of Cannabidiol. To date, 23 states and the District of Columbia have passed laws allowing marijuana to be used for a variety of medical conditions. Fifteen additional states have enacted laws intended to allow access to CBD oil and/or highCBD strains of marijuana. Interest in the potential therapeutic effects of CBD has been growing rapidly, partially in response to media attention surrounding the use of CBD oil in young children with intractable seizure disorders including Dravet syndrome and LennoxGastaut syndrome. While there are promising preliminary data, the scientific literature is currently insufficient to either prove or disprove the efficacy and safety of CBD in patients with epilepsy. and further clinical evaluation is warranted. In addition to epilepsy, the therapeutic potential of CBD is currently being explored for a number of indications including anxiety disorders, substance use disorders, schizophrenia, cancer, pain, inflammatory diseases and others. My testimony will provide an overview of what the science tells us about the therapeutic potential of CBD and of the ongoing research supported by NIH in this area.

CBD is one of more than 80 active cannabinoid chemicals in the marijuana plant. Unlike the main psychoactive cannabinoid in marijuana, tetrahydrocannabinol (THC), CBD does not produce euphoria or intoxication. Cannabinoids have their effect mainly by interacting with specific receptors on cells in the brain and body: the CB1 receptor, found on neurons and glial cells in various parts of the brain, and the CB2 receptor, found mainly in the body’s immune system. The euphoric effects of THC are caused by its activation of CB1 receptors. CBD has a very low affinity for these receptors (100 fold less than THC) and when it binds it produces little to no effect. There is also growing evidence that CBD acts on other brain signaling systems, and that these actions may be important contributors to its therapeutic effects.

The Biology and Potential Therapeutic Effects of Cannabidiol