Reference: The Discovery of the Endocannabinoid System
The National Institute on Drug Abuse inadvertently facilitated a series of major discoveries about the workings of the human brain.
By Martin A. Lee 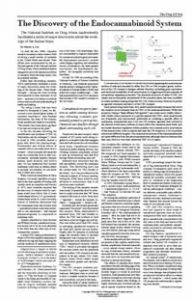 Up until the late 1980s, Cannabis research remained a rather esoteric field involving a small number of scientists in the United States and abroad. Their efforts were circumscribed by the politicized agenda of the National Institute of Drug Abuse, which subsidized studies designed to prove the deleterious effects of cannabis while blocking inquiry into its potential benefits. Rather than discrediting cannabis, NIDA inadvertently facilitated a series of major discoveries about the workings of the human brain. These breakthroughs —among the most exciting developments in brain chemistry of our time— spawned a revolution in medical science and a profound understanding of health and healing. “By using a plant that has been around for thousands of years, we discovered a new physiological system of immense importance,” says Raphael Mechoulam, the dean of the transnational cannabinoid research community. “We wouldn’t have been able to get there if we had not looked at the plant.” In the two decades following the identification and synthesis of THC by Mechoulam and his colleague Y. Gaoni in Israel in 1964, scientists learned a great deal about the pharmacology, biochemistry and clinical effects of cannabis. But no one really knew how it worked —what it actually did inside the brain on a molecular level to alter consciousness, stimulate appetite, dampen nausea, quell seizures, and relieve pain. No one understood how smoked marijuana could stop an asthma attack in seconds, not minutes. No one knew why it lifted one’s mood.

The Discovery of the Endocannabinoid System