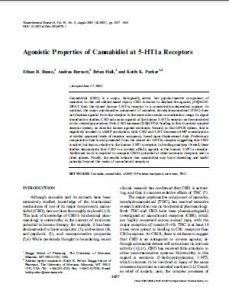 Although cannabis and its extracts have been extensively studied, knowledge of the biochemical mechanisms of one of its major components, cannabidiol (CBD), has not been thoroughly explored (1,2). This lack of knowledge of CBD’s biochemical pharmacology is noteworthy in the context of its known potential in human therapy: for example, it has been demonstrated to have anxiolytic (3), anti-seizure (4), anti-psychotic (3), and neuroprotective properties (5,6). While previously thought to be sedating, recent clinical research has confirmed that CBD is activating, and that it counters sedative effects of THC (7). The major psychoactive component of cannabis, tetrahydrocannabinol (THC), has received extensive research attention into its biochemical pharmacology. Both THC and CBD have been pharmacologically investigated at cannabinoid receptors (CBR), which are highly conserved across animal taxa, with the major exception of insects (8–10). THC is at least 10 times more potent in binding to CB1 receptors than CB2 receptors. At CB1R, there is evidence to suggest that CBD is an antagonist or inverse agonist, although substantial debate still exits about its intrinsic activity (10,11). CBD has received little attention in other neurotransmitter systems.