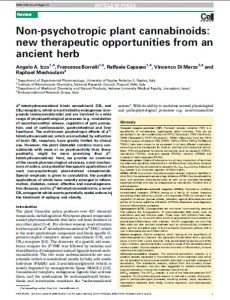 D9-tetrahydrocannabinol binds cannabinoid (CB1 and CB2) receptors, which are activated by endogenous compounds (endocannabinoids) and are involved in a wide range of physiopathological processes (e.g. modulation of neurotransmitter release, regulation of pain perception, and of cardiovascular, gastrointestinal and liver functions). The well-known psychotropic effects of D9- tetrahydrocannabinol, which are mediated by activation of brain CB1 receptors, have greatly limited its clinical use. However, the plant Cannabis contains many cannabinoids with weak or no psychoactivity that, therapeutically, might be more promising than D9- tetrahydrocannabinol.

Here, we provide an overview of the recent pharmacological advances, novel mechanisms of action, and potential therapeutic applications of such non-psychotropic plant-derived cannabinoids. Special emphasis is given to cannabidiol, the possible applications of which have recently emerged in inflammation, diabetes, cancer, affective and neurodegenerative diseases, and to D9-tetrahydrocannabivarin, a novel CB1 antagonist which exerts potentially useful actions in the treatment of epilepsy and obesity. Introduction The plant Cannabis sativa produces over 421 chemical compounds, including about 80 terpeno-phenol compounds named phytocannabinoids that have not been detected in any other plant [1–4].

For obvious reasons, most attention has been paid to D9-tetrahydrocannabinol (D9-THC), which is the most psychotropic component and binds specific Gprotein- coupled receptors named cannabinoid (CB1 and CB2) receptors [5,6]. The discovery of a specific cell membrane receptor for D9-THC was followed by isolation and identification of endogenous (animal) ligands termed endocannabinoids. The two main endocannabinoids are anandamide (which is metabolized mostly by fatty acid amide hydrolase (FAAH)) and 2-arachidonoylglycerol (which is mostly degraded by monoglyceride lipase (MAGL)) [5,6]. Cannabinoid receptors, endogenous ligands that activate them, and the mechanisms for endocannabinoid biosynthesis and inactivation constitute the ‘‘endocannabinoid