Reference: How CBD works. CBD How It Works By Martin A. Lee 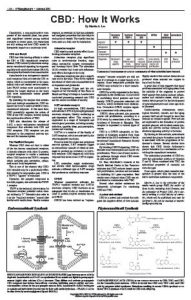 Cannabidiol, a non-psychoactive component of the cannabis plant, has generated significant interest among medical scientists in recent years, but researchers are still sorting out how CBD exerts its therapeutic impact on a molecular level. CBD and FAAH CBD has little binding affinity to either the CB1 or CB2 cannabinoid receptors. Instead, CBD indirectly stimulates endogenous cannabinoid signaling by suppressing fatty acid amide hydroxylase (FAAH), the enzyme that breaks down anandamide. Anandamide is an endogenous cannabinoid compound that activates the CB1 receptor, which is concentrated in the mammalian brain and central nervous system. Less FAAH means more anandamide is present for longer duration in the body. And more anandamide means greater CB1 signaling. By inhibiting the enzyme that metabolizes and destroys anandamide, CBD enhances the body’s innate protective endocannabinoid response. At the same time, CBD powerfully opposes the action of THC at the CB1 receptor, thereby muting the psychoactive effects of THC. CBD also stimulates the release of 2-AG, a major endogenous cannabinoid compound that activates both CB1 and CB2 receptors. CB2 receptors are predominant in the peripheral nervous system and the immune system.

CBD exerts an anti-anxiety effect by activating adenosine receptors. Adenosine receptors play significant roles in cardiovascular function, regulating myocardial oxygen consumption and coronary blood flow. The adenosine (A2A) receptor has broad anti-inflammatory effects throughout the body. Adenosine receptors also play a significant role in the brain. They down-regulate the release of other neurotransmitters such as dopamine and glutamate. Jose Alexandre Crippa and his colleagues at the University of San Paulo in Brazil and King’s College in London have conducted pioneering research into CBD and the neural correlates of anxiety.