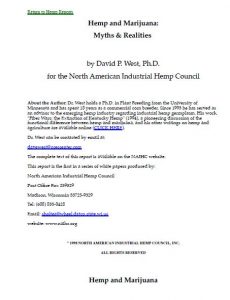 Surely no member of the vegetable kingdom has ever been more misunderstood than hemp. For too many years, emotion-not reason-has guided our policy toward this crop. And nowhere have emotions run hotter than in the debate over the distinction between industrial hemp and marijuana. This paper is intended to inform that debate by offering scientific evidence, so that farmers, policymakers, manufacturers, and the general public can distinguish between myth and reality. Botanically, the genus Cannabis is composed of several variants.

Although there has been a long-standing debate among taxonomists about how to classify these variants into species, applied plant breeders generally embrace a biochemical method to classify variants along utilitarian lines. Cannabis is the only plant genus that contains the unique class of molecular compounds called cannabinoids. Many cannabinoids have been identified, but two preponderate: THC, which is the psychoactive ingredient of Cannabis, and CBD, which is an antipsychoactive ingredient.

One type of Cannabis is high in the psychoactive cannabinoid, THC, and low in the antipsychoactive cannabinoid, CBD. This type is popularly known as marijuana. Another type is high in CBD and low in THC. Variants of this type are called industrial hemp. In the United States, the debate about the relationship between hemp and marijuana has been diminished by the dissemination of many statements that have little scientific support. This report examines in detail ten of the most pervasive and pernicious of these myths.

Hemp and Marijuana Myths and Realities