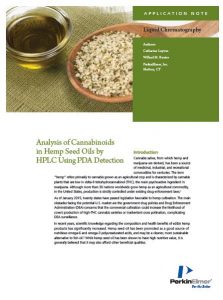 Cannabis sativa, from which hemp and marijuana are derived, has been a source of medicinal, industrial, and recreational commodities for centuries. The term “hemp” refers primarily to cannabis grown as an agricultural crop and is characterized by cannabis plants that are low in delta-9 tetrahydrocannabinol (THC), the main psychoactive ingredient in marijuana. Although more than 30 nations worldwide grow hemp as an agricultural commodity, in the United States, production is strictly controlled under existing drug enforcement laws. As of January 2015, twenty states have passed legislation favorable to hemp cultivation. The main obstacles facing the potential U.S. market are the government drug policies and Drug Enforcement Administration (DEA) concerns that the commercial cultivation could increase the likelihood of covert production of high-THC cannabis varieties or inadvertent cross pollination, complicating DEA surveillance. In recent years, scientific knowledge regarding the composition and health benefits of edible hemp products has significantly increased. Hemp seed oil has been promoted as a good source of nutritious omega-6 and omega-3 polyunsaturated acids, and may be a cleaner, more sustainable alternative to fish oil. While hemp seed oil has been shown to have high nutritive value, it is generally believed that it may also afford other beneficial qualities.

Naturally occurring CBD cannabinoids in hemp seed oil, the partial biologically active component of the hemp plant, form a complex group of closely related compounds, of which 70 are known and well described. Although no cannabinoids are metabolically produced by the hemp seed itself, contamination with resin from cannabis flowers and leaves during hemp seed oil processing can occur. Impurity reports have been primarily focused on THC for its pharmacological and toxicological relevance, upon which strict legal limits have been enforced. However, other cannabinoids provide unique biological activities. For example, cannabidiol (CBD), typically present at higher levels than THC, shows evidence of providing anticonvulsive, anti-epileptic, and antimicrobial properties.