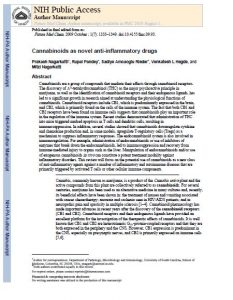 The fact that both CB1 and CB2 receptors have been found on immune cells suggests that cannabinoids play an important role in the regulation of the immune system. Recent studies demonstrated that administration of THC into mice triggered marked apoptosis in T cells and dendritic cells, resulting in immunosuppression. In addition, several studies showed that cannabinoids down regulate cytokine and chemokine production and, in some models, upregulate T-regulatory cells (Tregs) as a mechanism to suppress inflammatory responses.