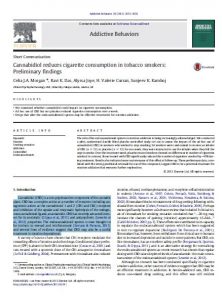 Cannabidiol Reduces Cigarette Consumption. The role of the endocannabinoid systemin nicotine addiction is being increasingly acknowledged. Weconducted a pilot, randomised double blind placebo controlled study set out to assess the impact of the ad-hoc use of cannabidiol (CBD) in smokers who wished to stop smoking. 24 smokers were randomised to receive an inhaler of CBD (n = 12) or placebo (n = 12) for one week, they were instructed to use the inhaler when they felt the urge to smoke. Over the treatmentweek, placebo treated smokers showed no differences in number of cigarettes smoked. In contrast, those treated with CBD significantly reduced the number of cigarettes smoked by ~40% during treatment. Results also indicated some maintenance of this effect at follow-up. These preliminary data, combined with the strong preclinical rationale for use of this compound, suggest CBD to be a potential treatment for nicotine addiction that warrants further exploration.

Cannabidiol (CBD) is a non-psychoactive component of the cannabis plant. CBD has a complex action at a number of receptors including antagonistic action at the cannabinoid 1 and 2 (CB1 and CB2) receptors and inhibition of the uptake and enzymatic hydrolysis of the endogenous cannabinoid ligand, anandamide. CBD has recently attracted interest for its anxiolytic (Crippa et al., 2011) and antipsychotic (Leweke et al., 2012) properties. The endocannabinoid system is now thought to be intrinsic to reward and reinforcement (Serrano & Parsons, 2011) and several lines of evidence suggest that CBD may also be a useful treatment in nicotine dependence.