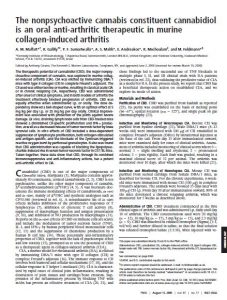 The therapeutic potential of cannabidiol (CBD), the major nonpsychoactive component of cannabis, was explored in murine collagen- induced arthritis (CIA). CIA was elicited by immunizing DBAy1 mice with type II collagen (CII) in complete Freund’s adjuvant. The CII used was either bovine or murine, resulting in classical acute CIA or in chronic relapsing CIA, respectively. CBD was administered after onset of clinical symptoms, and in both models of arthritis the treatment effectively blocked progression of arthritis. CBD was equally effective when administered i.p. or orally. The dose dependency showed a bell-shaped curve, with an optimal effect at 5 mgykg per day i.p. or 25 mgykg per day orally. Clinical improvement was associated with protection of the joints against severe damage. Ex vivo, draining lymph node cells from CBD-treated mice showed a diminished CII-specific proliferation and IFN-g production, as well as a decreased release of tumor necrosis factor by knee synovial cells. In vitro effects of CBD included a dose-dependent suppression of lymphocyte proliferation, both mitogen-stimulated and antigen-specific, and the blockade of the Zymosan-triggered reactive oxygen burst by peritoneal granulocytes. It also was found that CBD administration was capable of blocking the lipopolysaccharide- induced rise in serum tumor necrosis factor in C57yBL mice. Taken together, these data show that CBD, through its combined immunosuppressive and anti-inflammatory actions, has a potent anti-arthritic effect in CIA.

Hemp has a long history as a medicinal preparation, mainly for properties such as analgesia, antiemesis, ocular hypotension, and anticonvulsion (reviewed in ref. 35). Recent research in vitro and in animal models has led to increasing evidence that cannabinoids are also important modulators of the immune system (6) and thus could have a role in the treatment of chronic inflammatory diseases, were the development of clinical trials not hampered by legal obstacles. It is therefore important to find out whether nonpsychoactive cannabinoids are suitable for treating chronic inflammatory disease.