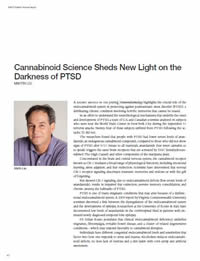 A RECENT ARTICLE IN THE journal Neuroendocrinology highlights the crucial role of the endocannabinoid system in protecting against posttraumatic stress disorder (PTSD), a debilitating chronic condition involving horri!c memories that cannot be erased. In an e”ort to understand the neurobiological mechanisms that underlie the onset and development of PTSD, a team of U.S. and Canadian scientists analyzed 46 subjects who were near the World Trade Center in New York City during the September 11 terrorist attacks. Twenty-four of these subjects su”ered from PTSD following the attacks; 22 did not. The researchers found that people with PTSD had lower serum levels of anandamide, an endogenous cannabinoid compound, compared to those who did not show signs of PTSD after 9/11. Innate to all mammals, anandamide (our inner cannabis, so to speak) triggers the same brain receptors that are activated by THC (tetrahydrocannabinol: The High Causer) and other components of the marijuana plant. Concentrated in the brain and central nervous system, the cannabinoid receptor known as CB-1 mediates a broad range of physiological functions, including emotional learning, stress adaption, and fear extinction. Scientists have determined that normal CB-1 receptor signaling deactivates traumatic memories and endows us with the gift of forgetting. But skewed CB-1 signaling, due to endocannabinoid de!cits (low serum levels of anandamide), results in impaired fear extinction, aversive memory consolidation, and chronic anxiety, the hallmarks of PTSD. PTSD is one of many enigmatic conditions that may arise because of a dysfunctional endocannabinoid system. A 2009 report by Virginia Commonwealth University scientists discerned a link between the dysregulation of the endocannabinoid system and the development of epilepsy. Researchers at the University of Rome in Italy have documented low levels of anandamide in the cerebrospinal #uid in patients with untreated newly diagnosed temporal lobe epilepsy.