Reference: Cannabidiol as a Treatment for Acne. New hope for the war on zits. O’Shaughnessy’s 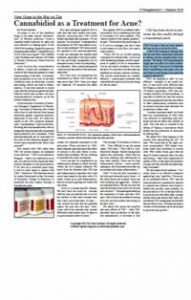 Accutane is one of the deadliest drugs in the aptly named “armamenture” of Western medicine. Could a cannabis-based medicine be safer and more effective in treating acne? At the 2009 ICRS meeting, Tamas Biro gave an intriguing talk entitled “Cannabidiol as a Novel Anti-Acne Agent?

Cannabidiol as a Treatment for Acne? CBD Inhibits Lipid Synthesis and induces Cell Death in Human Sebaceous Gland-Derived Sebocytes.” Acne involves the overproduction of sebum, a lipid (oily substance) excreted by the sebaceous glands to create waterproofing of the skin. Conversely, lipid production is too low in dry-skin conditions such as seborrhea, eczema and itching (which can lead to inflammation). It has been learned in recent years that the sebaceous glands and hair follicles (which also produce oil) have endocannabinoid receptors, as do the surface keratinocytes.

CBD? He said it had not been studied, but was on his to-do list for 2010. At the ICRS meeting in Chicago Biro met several other researchers interested in testing various cannabis-plant compounds. “We think CBG [cannabigerol] might have an effect [on lipid production],” he said. “Once you’ve found that there’s something in the plant, why not see if there’s other things in the plant that might be effective?”

CBD, he hastened to add, “is very efficient —actually, in our model system, it was much more efficient than the Vitamin A derivatives like Accutane. Of further importance, CBD was universally inhibitive of lipid synthesis. It was able to inhibit not only the actions of endocannabinoids but also the effects of other inflammatory mediators such as steroid hormones that stimulate fat production in these cells.

Inflammatory disease in which the skin within the zit is highly inflamed. We know from the literature that CBD has anti-inflammatory properties but it had never been tested on the skin cells. If it really works as an anti-inflammatory, then we would be getting two birds with one stone.
Cannabidiol as a Treatment for Acne