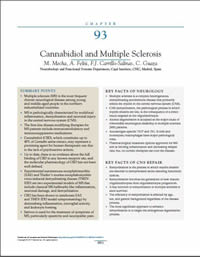 Cannabidiol and Multiple Sclerosis. CBD  Isolated in across the 1930s and 1940s from C. sativa, the structure and configuration of CBD was fully elucidated by Mechoulam et al. in the 1960s (Mechoulam & Shvo, 1963; Mechoulam, Shani, Edery, & Grunfeld, 1970). The first study focusing on CBD pharmacology was published in 1981, regarding hypnotic and anticonvulsant properties (Carlini & Cunha, 1981). Along this time, several studies have been done to identify the mechanisms through which CBD exerts its actions. Up to date, there is no evidence about the full binding of CBD to any known receptor site. The molecular pharmacology of CBD has not been well defined yet, and little is known about a possible CBD-receptor-mediated signaling pathway. It is known that many of the CBD effects are associated with both central and peripheral actions, and numerous studies has been reported trying to elucidate some of its mechanisms of action (Table 93.3), that are detailed later in the chapter.

CBD is a Potent Antioxidant Pioneer works by Hampson, Grimaldi, Axelrod, and Wink (1998) showed that CBD has antioxidant properties that have been confirmed along several publications. The plant cannabinoids, being monophenols, monophenolic esthers (like THC), or resorcinols (like CBD) are likewise potent antioxidants. Hampson et al. (1998) demonstrated that CBD exerted a potent antioxidant activity that resulted more protective than either ascorbate (vitamin C) or α-tocopherol (vitamin E) against glutamate-mediated neurotoxicity.  Cannabidiol and Multiple Sclerosis Is CBD Potent Antioxidant?

These observations suggest that CBD may be a potential therapeutic agent for the treatment of oxidative neurological disorders like cerebral ischemia, and for diseases that course with oxidative damage. CBD Potentiates the Endocannabinoid Signaling System In the immature damaged brain, CBD has shown direct activity binding to the CB2 receptor, and an indirect activity through an inhibitory effect on the mechanisms of inactivation of endocannabinoids (transporter, FAAH enzyme) (Bisogno et al., 2001; De Filippis et al., 2008). In this line, the enhancement of the endocannabinoid tone may mediate some of the antiinflammatory and neuroprotective effects of CBD.