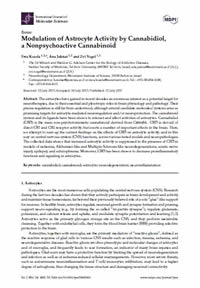 Cannabidiol a nonpsychoactive cannabinoid CBD, a major non-psychoactive constituent of Cannabis, has been described as neuroprotective, anti-oxidant, and anti-inflammatory in various models of brain.

The astrocytes have gained in recent decades an enormous interest as a potential target for neurotherapies, due to their essential and pleiotropic roles in brain physiology and pathology. Their precise regulation is still far from understood, although several candidate molecules/systems arise as promising targets for astrocyte-mediated neuroregulation and/or neuroprotection. The cannabinoid system and its ligands have been shown to interact and affect activities of astrocytes. Cannabidiol (CBD) is the main non-psychotomimetic cannabinoid derived from Cannabis. CBD is devoid of direct CB1 and CB2 receptor activity, but exerts a number of important effects in the brain. Here, we attempt to sum up the current findings on the effects of CBD on astrocyte activity, and in this way on central nervous system (CNS) functions, across various tested models and neuropathologies. The collected data shows that increased astrocyte activity is suppressed in the presence of CBD in models of ischemia, Alzheimer-like and Multiple-Sclerosis-like neurodegenerations, sciatic nerve injury, epilepsy, and schizophrenia. Moreover, CBD has been shown to decrease proinflammatory functions and signaling in astrocytes.

Astrocytes are the most numerous cells populating the central nervous system (CNS). Research during the last two decades has shown that they actively participate in brain development and activity, and maintain tissue homeostasis, far beyond their previously believed role of a sole “glue”-like support for neurons. In healthy brain, astrocytes regulate neuronal growth and synapse formation and pruning, support neuro-signaling (e.g., by forming the so called “tri-partite synapse”), regulate glutamate, potassium, and calcium release and uptake, and modulate synaptic potentiation and learning [1,2]. Astrocytes serve as the primary glycogen storage site in the CNS, and they perform metabolite cleansing. Together with endothelial cells, they form the blood brain barrier (BBB) providing selective protection to the brain.