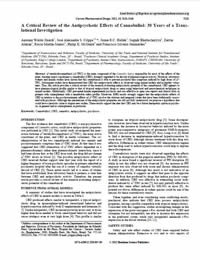 The first evidence that cannabidiol (CBD), a non-psychoactive component of Cannabis sativa, could have antipsychotic properties was published in 1982 [1]. This initial study investigated the interaction between 􀀁9-tetrahydrocannabinol (􀀁9-THC), the main active constituent of the plant, and CBD in health volunteers. The coadministration of the two cannabinoids induced less anxiety and psychotomimetic symptoms than 􀀁9-THC alone. At that time it was suggested that CBD attenuation of 􀀁9-THC effects depended on a pharmacodynamic rather than pharmacokinetic interaction, since it had been shown that, at the CBD dose used, the drug did not change 􀀁9-THC levels in blood [2]. The possible antipsychotic effect of CBD received further support later that year with the report of a higher frequency of acute psychotic episodes in patients admitted in psychiatric hospital after the use of a variety of cannabis virtually devoid of CBD [3]. These initial results led to a series of studies that have established, from laboratory bench to patients, a clear link between CBD and antipsychotic activity. Therefore, the present article provides a critical review of the research evaluating antipsychotic potential of this cannabinoid.

MODULATION OF REGIONAL BRAIN ACTIVITY BY CBD – Studies aimed at investigating at the same time CBD effects on behavior and regional brain activity could provide an initial clue about its mechanisms and place of action. Functional magnetic resonance imaging (fMRI) was used to study the effects of 􀀁9-THC (10 mg) and CBD (600 mg) on activation of several cerebral regions of 15 healthy volunteers during tasks related to modulation of specific brain regions.


The Antipsychotic Effects of Cannabidiol